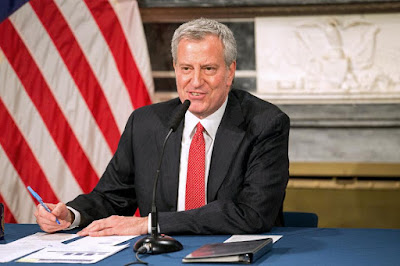 New York City’s 1.1 million public school students will attend class part-time this fall according to a preliminary plan announced today by Mayor Bill de Blasio in a press conference. Students will spend one to three days in the classroom each week. On staggered schedules, there will likely be only a dozen people gathered together at a time, including students, teachers and aides.
The nation’s largest school system, which has more than 1,800 schools, has long been plagued by overcrowding, with classes held in hallways and trailers. Most classes in middle and high school have at least 30 students. De Blasio and schools chancellor Richard Carranza, said they will adhere to the school safety guidelines laid out by the CDC, which recommend that students and staff stay six feet away from one another.
De Blasio laid out three possible scenarios. In one, school buildings would accommodate 50% of the number of students they had taken in the past. Students would get live instruction the same two days each week and every other Monday. The second plan would serve only a third of the normal number of people in each building. Students would go to school 1-2 days a week and get a total of five days of in-person instruction every three weeks. In the third model, students would attend in a six-day rotation, with two consecutive in-person days and four remote days in a cycle.
De Blasio said that the plan is subject to change, depending on recommendations from public health officials.
New York Governor Andrew Cuomo, who frequently clashes with the mayor, said in his own press conference later today that he would make the final decisions about school reopening statewide. He will issue additional guidance Monday and school districts must submit their reopening plans to his office by July 31. A final decision will come the first week in August.
It’s not clear whether Cuomo will try to interfere with de Blasio’s plan. When a reporter asked the governor whether de Blasio’s ideas were “credible,” Cuomo answered “No.”
President Trump has been pressuring school leaders to fully reopen K-12 schools. Today he threatened to withhold federal funds if they don’t. Most school funding comes from state and local government sources. The federal government pays for just 8.3% of public school budgets nationwide, according to government figures. Nevertheless, Trump and Vice President Pence are trying to control what local districts do. To make it easier for schools to open, Pence said today that the CDC would issue new, less stringent school reopening guidelines soon.
Posted by 'izzan alfi nauraa at 14:06:00
Email ThisBlogThis!Share to TwitterShare to FacebookShare to Pinterest
Labels: 07 Just Stay Home Japanese Recipes Everyone Can Make, educational disparity, Naura New, STRATEGIES FOR HOMESCHOOLING GIFTED CHILDREN
Newer Post Older Post Home